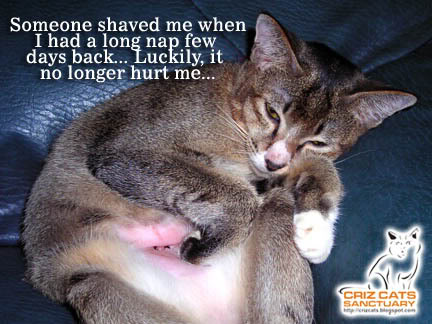 UPDATES WITHIN THE J FAMILY CIRCLE

I have been rather busy for the past few days running around and by the end of the day getting myself over exhausted even to stare at the computer. But I guessed more of you would want to know what had been going on for the past few days, right? Let me gather all the happenings in one post instead of breaking it into many posts.

Janice has recovered rather well and has started to play with the rest of the rough brats. Unfortunately, I had to stop her from over exerting herself as she still has to care for her operation wound. I would have to bring her to the vet again to take off those stitches next week. The only problem I had now is to find a way to stop her from sleeping on my lap for hours. The last was more than 6 hours and “something” almost got injured there with her having wild dreams all the time. 😛 Justin was having diarrhea on the day Janice went for the operation. I had to rush him to the vet for treatments later that day. He is fine now but his “ahem” was still watery. I hope he gets well soon by resting more instead of running in and out of the house playing. I had suspected that he has been chasing and chomping down unwanted pest in the house. Jayson eventually caught the diarrhea bug yesterday morning. He has been purging nonstop ever since, although he also had the necessary medical attention as Justin. The vet must be smiling all the way at the rate I was bringing in the kitty one after another. Poor baby or should I say poor Daddy? I had been cleaning nonstop for the whole day from the living room, sitting room, kitchen, bathroom, stairways, bedroom and porch practically ever hour right until I dozed off from exhaustion. I do not like the way he has been behaving now by the look of his weak body, running tears, wet tail and crying look. If things did not get better, I will have to admit him again for inspection. Jimmy and Joey are both growing up fast. I could not believe that they were born barely 11 days ago. Someone actually told me that they look like hamsters with their calico colored furs. Are they calicos? I’m still not sure as Jimmy is 100% confirmed A MALE!