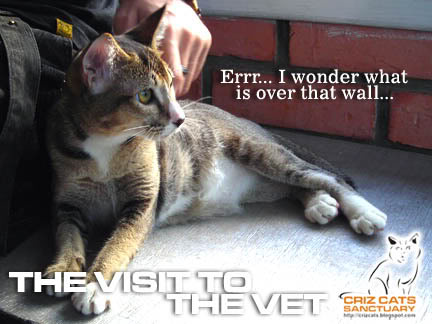 BACK FROM THE VET Janice is back!! She’s home resting now!! I’m sure this is what all of you might want to hear, right? Well, she might be fine now but things for did not worked out as I had planned earlier. Janice did not even realize that she was going to the vet to be spayed. She was still enjoying the beach views on the way to the vet. At the vet’s place, she was in her usual energetic mood stalking for small birds in the garden. I guessed she was still too young to understand the meaning of “LadyGardenectomy”. Everything went on smoothly when we checked in at quarter to 9am for the appointment. Within a few seconds after given the anesthetic jab, she was already knocked off. The operation took barely an hour and by 11.15am, she was ready to check out. She is sleeping tightly in her bed now.

When all the excitements were around, my digital camera decided to “die” with its lens stuck. No matter how many times I had removed and put back the fully charged rechargeable batteries, it refused to move. Minutes and hours had passed and I am missing out videoing the experiences I had with Janice at the vet. The one and only shot I had after the operation is this shot. It looked like a smile but in fact that’s the part the vet had taken out from Janice’s body. Maybe certain things God might have prohibited me to share around here. Instead, He gave me a blur photo of a “Smile”. So, you might not get any photo updates for some times until I get the camera fixed if only I can get out of the house now. The boys had been going all over Janice’s sleeping body now and I’m afraid that they might hurt her. I have to be beside her all the time until she’s fully awake.

At 1.30pm, I got panicked as she vomited yellow fluid and stained my sofa. I immediately called the vet and was assured that it was normal to vomit as Janice may not be used to being on diet. She’s a heavy eater! At 2.15pm, she vomited again when I tried to give her some water and some chicken meat which I had prepared just for her. The boys were aiming at the food all the time, so did Papa Jon and Mama Jess. At 3.00pm, she could stand up and walk a bit but still stumble back onto the floor.

I have to keep guard on her moves every single minute. It’s tiring as she did not let me sleep the whole of last night with her howling and crying being encaged. I have no choice. That’s the pre-operation instruction that I will have to follow. No food after 6pm and no water after midnight.

Please excuse me. I’m very exhausted and almost dozed off right in front of my screen just now. I will put forward my CATSOPHERE reviews until next week. Let’s hope I can borrow a digital camera for some time until my camera is back. Have a great week ahead! 🙂