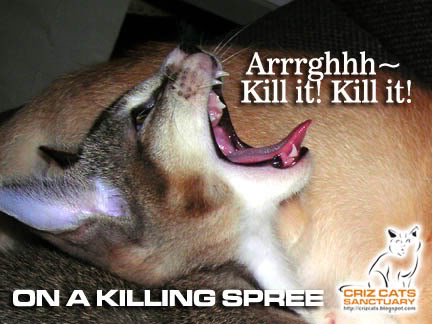 I WAS ON A KILLING SPREE!

After the tiring experience with the stray throwing and squashing his “buns” all over the house, I was hit with another dilemma. Mama Jess and the kitties were all screaming and crying continuously the next morning. I thought all of them have gone psychotic overnight due to being haunted by the stray kitten. Hey! This is not right! I saw the stray hiding in my garden peeking at me this morning. Upon checking each member of the family, I found that I have landed myself into the worst case of an epidemic… Flea Infections! One stray and hundreds of fleas! Having no other alternatives, I armed myself with anti-flea shampoo, dry towels and my most important gadget… a pincher. It is going to be a bath day for all! Mama Jess was the first as she was the one whom the kittens would like to stick to most of the time. When I shampooed her, I could see all the black tiny spots all over her body. I scrubbed her chin and a few fleas can be seen running for their lives. By the time I warm shower her, there were tens of fleas floating about in the water. I then towel dry Jess and slowly inspect into her wet fur. Each flea I saw, I will pinch it up and drown them in a bowl of water. By the time I finished with Jess, there were about fifty fleas in the bowl. It is terrifying to see that. Next was Jeremy. Being the sole long haired kitty of the family, I would expect him to have many fleas hidden under his thick coat of fur. But I was wrong. He had less than three dozens. Janice was in line next and she too hardly has many. Maybe the colors of her silky coat made detection hard. Jayson and Justin both were badly infected until I needed a stool for my aching legs. Jayson had about eighty fleas whereas Justin set a record breaking of one hundred and thirty fleas!

Haha… I never thought I would be so brutal as to go on a killing spree but this is all for the safety and comfort of my beauties. I could not believe myself that I had killed not less than four hundred fleas in a row (excluding those washed down the drain during shampooing). Now I will need a long nap after four hours of eyes popping experience with fleas. I ought to be careful next time to avoid the same trauma. Jonathan has not come back from his sex expedition yet for continuous five days! If I ever get to see him again, it would be his worst nightmare in a bath. Grrrr.. FLEAS!!! Piaks…..