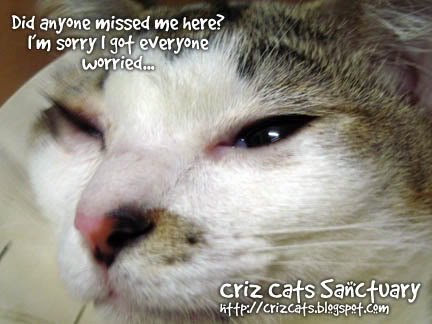 DID ANYONE MISS ME? Thanks to everyone who had came in here to give us some comfort. I appreciate it a lot. The day went by rather hectic with me spending practically the whole day with Joey at the vet trying to get her all fixed up. It was indeed a terrible experience for her to be in a long distance trip to a foreign place with a foreign scent. Yup! I had to change my vet for some personal reasons.

Jackie (Eric & Flynn’s Mom) was right. She did not get any wounds from any excessive playing or fights but had injured herself by rubbing and rubbing her eyes until it bled. I must admit I did not watch the whole medical procedures as I was too exhausted, mentally and physically, from a hectic work schedule and the lack of sleep for staying up all night. I just dozed off in the waiting room for hours. I just wondered why the vet did not wake me up. I guessed she would have understood the tension and pressure I had the night before. Based on the vet’s report, she did not find any foreign objects in her right eye but a tiny lump at the bottom of her eye lid. Most probably it could be an insect bite (suspected a mosquito) since she loves to hide and sleep in dark areas of the house. To kill the irritation, she had rubbed her eyes furiously and torn some tissues there. As a result, that was what happened as in the photos I had shown yesterday. It would take a few days with proper medication and eye drop before she could regain her total sight. I was so relieved to hear that as I thought my baby would be blinded for the rest of her life. Thank God!!

I have to say thanks to Lego too for making me remember him in his improvised paper plate collar when he was younger. The vet was amazed with my first reaction to stop Joey from injuring her eye further. We had a laugh after I told her about what Michico did for Lego. To her, that was a genius idea! Well, that did save me some dough too as the vet allowed me to do so later instead of spending more in getting a new collar for Joey.

Joey’s eye is getting better after more than 24 hours with the proper treatment. But… she could be real demanding. She still insisted on me hand feed and syringe feed her every few hours. Gosh! I hope this will end soon before I over pamper her with Her Majesty’s treatment. LOL! I would also like to share something wonderful that happened last night. I was not alone taking care of Joey. Someone else was with me… Jimmy. It’s true that you can’t break the close ties between a pair of twins. Jimmy was beside his elder sister until the morning, giving her the warmth and comfort a sibling would do during bad times. It was so touching… I could not hold back my tears seeing such a rare sight between these two kittens. At first, he was just next to her staring, sniffing and licking her sister to give her a thorough wash before he dozed off in that position. After half an hour or so, I saw him wrapping around Joey to keep her warm as it was still raining out there. It all came so naturally. I’m so thankful that I have such a great J family around to make my life more meaningful…