I AM CRYING NOW 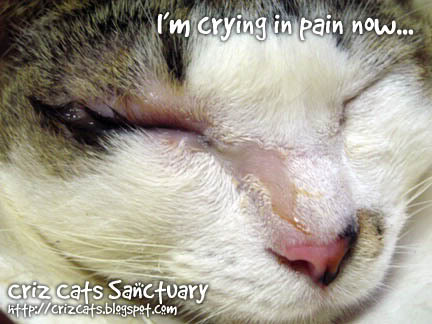 I have been asking myself this question ever since Joey slept barely an hour ago. Why must all the mishaps happen during a Sunday at odd hours when I can’t seek help from anyone? First it was a visiting Alpha with a badly torn lips, then Panther with a almost life threatening situation, then Janice with weird looking horns, then a badly beaten up stray at a nearby KFC outlet and now this? I guessed this is the act of God to test my patience and commitment to seek help for these poor kittens.

Barely few hours ago, I was still munching a piece of biscuit with all the J Kitties staring at my hand. Everyone was sitting there with those pathetic eyes wanting to have a bite. Half an hour later, I felt something rubbing at my feet and it was Joey. I felt dampness which I thought was her normal habit of playing with water in the washroom. As usual I would bring her up onto my lap and stroke her to sleep. She acted normal with her eyes closed while I was busy meeting some deadlines with my computer. A few seconds later, she began to feel agitated and started brushing her eyes furiously.

I saw watery blood and it almost cost me to fall over my chair. Gosh! What had happened? The others were all lazily scattered all over the sitting room and I did not hear any fights or any of them playing noisily as before. The sight got me panicked. She was blinded by a piece of pinkish flesh protruding through her right eye and the other could hardly open. It’s almost after midnight and it’s raining furiously out there. Who would answer my call at this hour? No one! Not even the vet! 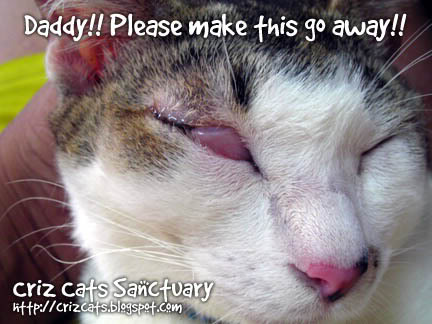 I had to find a solution now. I hope the warm treatment I had applied would at least soothe her swell for the time being before the morning vet visit. Well, I had to use a paper plate to temporary stop her from further wounding her already swollen eye. It did help, provided the rest would just stop messing with her “new collar”. I guessed I would have to accompany her the whole night now to ensure that she’s not in further pain. It has been three hours after the incident now and seven hours before the vet would open his clinic for business. I’m sitting down here praying and hoping that the worst would not happen. I won’t want my baby to go blind but there’s nothing else I could do except to stroke her and give her the comfort she would need now. Not only is she crying… I am too… I had just lost my mood to do anything else but to wait patiently but sleepily as she would really need my help to finger feed her again when she wakes up. 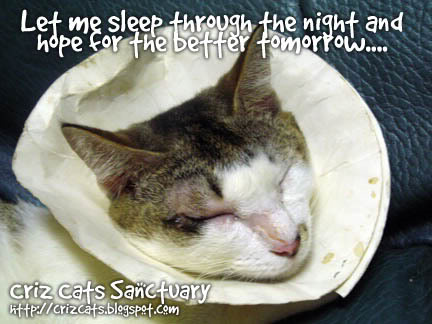