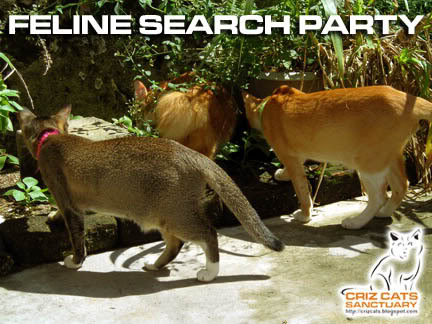 I get really stressed up when one of my kitties decided to pull a stunt as this. Playing missing for days is not something that I like at all. First it was Papa Jonathan, then Mama Jessica and now it’s Jayson’s turn. I am just waiting to see who else will be next. I wished my kitties would understand well that it’s a dangerous place out there with stray dogs, mafia cats, inhumane people and ever flowing of vehicles out there. It’s just not safe for them to linger out wildly without any supervision. I took the whole day off just to check out all the possible places Jayson might have gone but without any success. In the end, I have to seek the help of the rest of the bunch to hold a search party. At least they have the sensitive hearing to hear the cries of Jayson if he were to be anywhere nearby. Luckily with their cuteness and cheekiness, I was able to cheer myself up a bit. 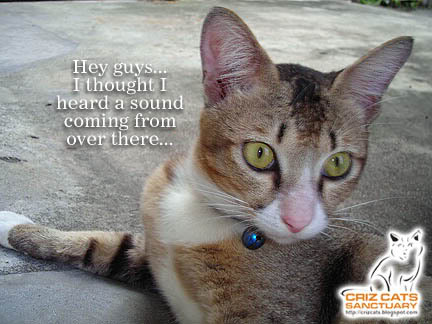 Of all the stunts, Jayson has to pull this. He managed to jump out of my windows upstairs without me knowing and landed himself into my neighbor’s house. The worst thing to happen to him was that they were not in for days and he was locked inside their house for days without food and water. Errr… hopefully he did not steal my neighbor’s food.

Luckily, Justin was able to detect the SOS cries of Jayson and led me to their front door. I did hear Jayson’s cries in there. He sounded real panic. The front metal door was locked but fortunately they forgot to lock their wooden door inside. I managed to push a bit and there it was Jayson looking at me with his pathetic look. It took me two hours just to persuade him to jump over the metal door and fed him with food and water. I hope he has learned his lesson well not to break out and intrude other people’s property. Now I have something else to worry about… Where has he been doing his “business” in there? I hope I won’t get into trouble for that!