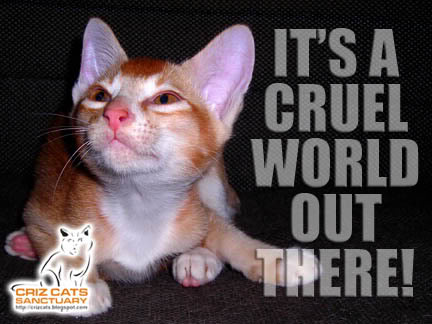 IT IS A CRUEL WORLD OUT THERE! Can you still remember the outcry for justice against animal abuse when someone posted up a video in YouTube of the army personnel throwing a baby woofy into a ravine? They denied the fact that it was a real puppy but a toy dog. I just could not believe that it was fake as I can smell a puppy when I see one. They stink! 😛 So many people, especially animal lovers were against that act. So was I even though I do not like them a lot because they made me go crazy over their barking whenever they see me walking by. Can you believe that in certain part of the world, they are killing woofies to make into an exotic dish? It is so disgusting and cruel to my other pet friends. Those woofies were already so pitiful being caged like wild animals. Yet they are faced with the death clock clicking mercilessly in front of them. I thought of showing the photo here but then it is not appropriate to haunt some of the young kitties here for their whole life. You can check it out but I would not advise you to click here if you have a faint heart to see the bloody scene. Day and night, the woofies were forced to watch in fear how their companions were slaughtered one by one right in front of their eyes. What are the humans up to now? Don’t they ever get enough of meat from the poultry they have bred? They have the moos, the baas, the cockadoodles and the flip flap bubbling fish and yet they still want us pets in their menus? I am sure we too fall victims in the cruel hands of those buyers and sellers. Well, a table has four legs too. Why don’t they eat that?

“Justin! Stop that please! You are making me scared!” shouted a shivering Janice. “What’s going there, Janice?” asked Mama Jess. “You are trembling in fear.” Janice answered shakily, “Mommy… Justin showed me some bloody woofies photos!” “Justin! Stop that now or I’ll smack you right away!” scolded Mama Jess. “If you think you are the next lion king, go stay in the jungle! We are civilized animals here!” 2008-03-18
Previous Post: CATS ON TUESDAY – JONATHAN THE DESPERADO
Next Post: WHY A WILD STRAY CANNOT BE IN THE SAME HOUSE