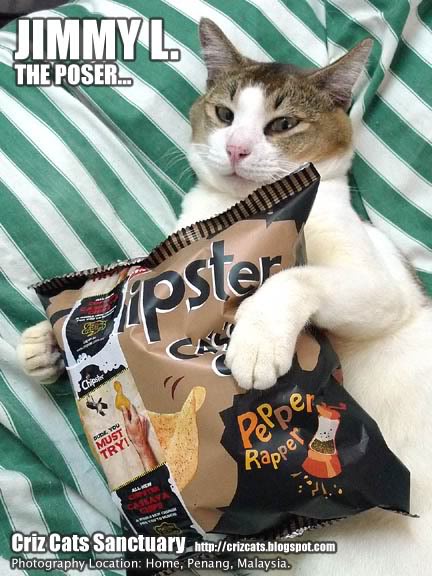 I have a phobia on the “F” word until I feel like crying out loud now. FLUTD (Feline Lower Urinary Tract Disease) is the word and it struck Jimmy real badly this time. The J Family Kitties are sure having a big bout of bad luck for the last 1.5 years. Firstly, it was Jeremy who had gone over the rainbow bridge due to a late detection. Then, it was Mama Jessica who was lucky being a female with a wider urethra to survive the bloody and painful ordeal. Jerry went across the fastest with the fatal FLUTD blow due to a cheap brand of dry cat food fed by his former owner. His brother, Jiro, suspected having it but luckily it was just a minor bacterial infection. The worst case affected Jimmy, exactly 3 years 9 months old today, who never had any bad medical record since birth. At a human age of 31 years old, it’s not such great news too. It has been a tiring and stressful night for me since Jimmy suddenly went into a fit at 1.00am in the morning. His actions had all the symptoms of being down with FLUTD. Surprisingly, he was still playing with his sister, Janice, at midnight while not showing any pain at all. I have not been resting ever since. Wiping and sanitizing almost every single tile in my living room can be a huge task for an unhealthy person like me. Unlike Jerry who could not make it on time to my personal vet due to a later operation hours, I rushed Jimmy to the earliest vet available. He was admitted immediately. Jimmy is now undergoing an emergency bladder dialysis to save his threatened life. I could not stand the thought of having an irrigating bladder dethrombulator being used to flush out the calcium crystal in his bladder. Can you imagine having a catheter or sometimes known as a conduit inserted through the penis hole right into the bladder in the process for the next few days? It would be real painful experience for him but it a must to unblock his narrow urethra for survival. Luckily, they will be putting him under sedative with pain killer injections to soothe the pain. 5 days or more is something that Jimmy had not done before away from me. He had to be admitted at the vet for 5 days or more (plus under observation in case of any complications) for bladder dialysis and with a micro tube hanging out of his penis for the next few days? Argh! I’m not going to like this sight. I won’t like the figures on the bills at a later stage too for the hospitalization, food, vitamins, injections and God knows what else they would add in it. Moreover, he has to be put under a strict pH balance c/d prescription diet, which is 5 times the cost of his present food, for the rest of his life. Gosh!

SPECIAL ATTENTION: Some of my friends had suggested that I put all the cats on wet diet (canned or home cooked without oil) and get rid of all the commercial dry cat foods labeled as being formulated for urinary tract health. Chances are these might be too acidic for your cat. Some even suggested a no fish flavored dry food which is believed to be one of the causes other than being too stressed for getting FLUTD. I spoke to this new vet of mine who’s an expert in pet diet. THERE IS NO STAND OR PROOF ON THESE ACCUSATIONS. The best solution to avoid FLUTD is a regular visit to check up on the alkaline or acid level in your pet’s urine to determine what prescription diet suits your pet best. These diets may be rather costly but it would save your pet’s life in a long run.
2012-02-22
Previous Post: A YEAR HAD PASSED BUT YOU STILL LEFT ME WITH A BROKEN HEART
Next Post: JIMMY WANTS TO COME HOME BUT I WOULD NOT ALLOW HIM TO DO SO