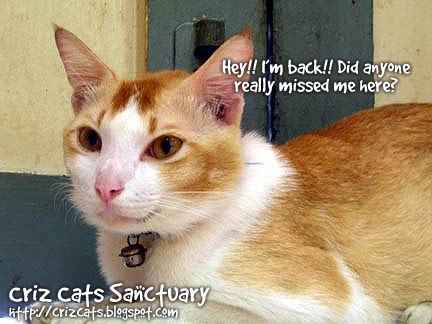 THE MYSTERIOUS DISAPPERANCE OF JAYSON Jayson has finally come back but there’s a mystery behind his disappearance. I am still pondering how he could have disappeared for weeks and yet come back to be so clean and fat. Even his coat was as silky as ever. Did someone “catnap” him and pampered him to the extreme? He behaved as if nothing has changed before, taking his meal as usual and greedily staring at my piece of KFC in hand. With weeks of worries and missing the warmth he has on my feet each night, he suddenly appeared out of nowhere seeking for more food. It sounded real mysterious right? I have been asking every single house in the neighborhood and even those with pets (basically dogs) and none of them has seen him anywhere. Moreover, he’s quite a homely cat who would not wander too far away from home.

I guessed with his return, I can have less stressful moments thinking about his safety. Hmmm… something else sounded rather fishy here. Instead of moving towards me immediately, there was a short detour to Janice’s “lounge”. There were hisses and “grumbling” between the two of them. I wished I could understand cat language better… What do you think they are arguing about?