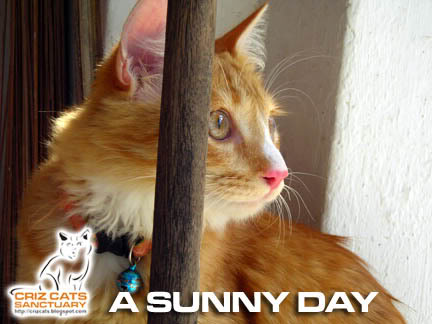 IT IS A SUNNY DAY The J Kitties had been forced to stay in for so many days as it was a week filled with raining and thunderstorm. Finally, there was some sunshine today and thus all of them were allowed to go out for some fun. Everyone enjoyed themselves…errrr… except one big grumbler. First he jumped up onto the chair and looked at the rest playing happily outside. He just sat there and complained that the weather was too hot for him to be out there as he was sweating and panting heavily. He will need to avoid getting dehydration from the dryness and humidity and required lots of cool water inside. As a result of all his complaints, he had decided to stay under some shade within my porch area. I did not realize why Jeremy’s react that way until Mama Jessica laughingly told me the reason behind his actions. Finally, I left the gate open to enable him to be with the rest. Gosh! Jeremy had grown up real handsomely but he had put on so much of weight that he could not push himself through the holes. I just wonder why he would gobble in so much knowingly that he would not be able to get out in no time. Maybe I should put him on a strict diet soon. Shouldn’t I?
2008-09-03
Previous Post: I RATHER BE OUTSIDE
Next Post: J KITTIES EXCURSION – PART ONE