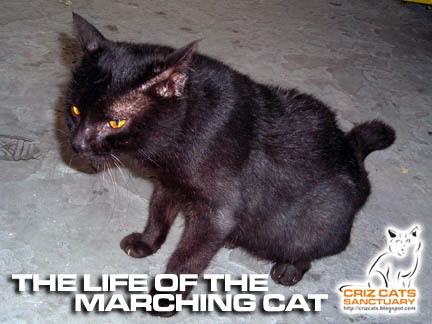 THE LIFE OF THE MARCHING CAT

I can still vividly recall about a year ago as I was at my mechanic’s place when a black kitten fell down from the roof and obtained a very bad injury. He was trembling and shaking vigorously. Both of us rushed him to the nearest vet. According to the vet, he broke his spine and damaged part of his brain from the impact of the fall. The kitten was given a 10 percent chance of survival. The most he would be alive was estimated to be just few weeks as he was unable to feed or fend for himself.

Feeling rather disappointed, we bought him back to the garage where we handfed him every few hours with milk and some soft food. Weeks and months went by as we watched him struggling daily to keep himself alive. He was such a fighter. He managed to pull through his predestined death call and grew into quite a manly cat. My mechanic decided then to adopt this kitten together with his 5 dogs, two of them being real vicious. To my surprise, none of the dogs mauled the helpless black kitten to death. In fact, they protected him more closely than ever. I was busy for some time with my job and did not have the time to visit my mechanic’s place for a few months. It was only a few days ago that I went there to tune my engine that I get to see that black cat again. As usual, he will be sleeping near the territory of the two fierce dogs. I called him and he managed to walk clumsily towards my voice. Gosh! He could still remember me after all these months. Maybe I was one of his two life savers that he would not forget for the rest of his life. I hardly could recognize him as he had put on quite a lot and grown stronger than the last time I saw him. He used to stumble down with every two steps he made few months back. At least now his legs were able to support the weight of his body but the way he walks can be very funny. He walked as if he belonged to the marching troops. Well, that is not much of importance to me. The most important thing is that he was able to stay on in this world, proving to us that as long as there is still love, care and compassion, staying alive would be worth the fight. Panther, I salute you for your will power! Here is the miracle video of a surviving “marching” cat who I had named Panther.