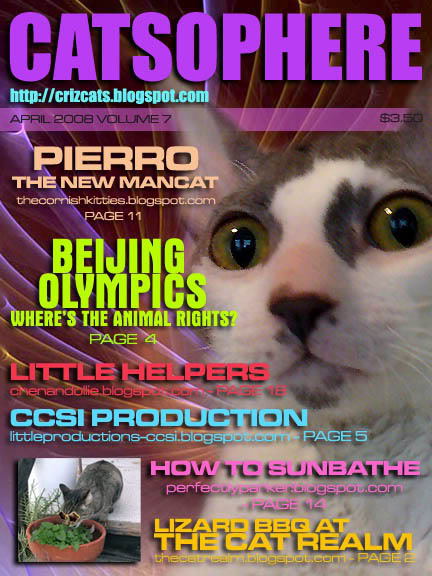 The cover model of this issue is Pierro, the newest mancat in the CATSOPHERE. He is also the newest little brother of our lovable Princess. Pierro is just a 6 months old kitten who is getting on real well with Princess. Initially, there were two kittens brought into the family to accompany Princess but Primus was too hyperactive for the family to accept him. Pierro is going to grow up as a great mancat as he behaved just like Caesar who went over the rainbow bridge not long ago. Well, I do miss Caesar. Do you? Have you heard about why many countries are thinking about boycotting the Beijing Olympics Games 2008? There are just too many reasons the world leaders have voiced out ranging from human rights, animal rights up to pollution. The way the Chinese are handling the stray cats are too cruel. Do read out more about the issues. What would you do if your humans are too busy to take care of their baby? As part of the family, you should lay a hand to help out the family chores. That’s what Chen and Ollie did in keeping their eyes on their new baby when the humans are busy with other duties. Check out what the little helpers did over at their site. Did you know that the CCSI Production (Cat/Canine Crime Scene Investigation) had come out with two beautiful productions not long ago? It began as a fun scheme for some kitties namely Karl from Texas, Ruis from the Netherlands, Opus and Roscoe from Italy, Sassy from rural mid west USA (who came up with the idea originally) and Momo from Australia. Sometimes a dog, Asta, from New York City also helped out with the photoshopping. What made the production a success is that it involved many cats and canine around the blogosphere. You should check out the storylines. They are wonderfully written. Spring is already here for many countries, thus providing the nice beautiful ray from the sun. Some of you may spend your time sunbathing by the beach or on the yummy green grass. What about those of you who are staying in high rise area? Let Parker and gang show you how you can still sunbathe in the city. The featured photo this week is on Karl from The Cat Realm. The blog will be celebrating its blogoversary this 15 April 2008. There will be a lizard BBQ and music all night long. Bring in more lizards or other nice food in case you think you might not have enough to eat as the crowd there is going to be real packed. Drop in now to check on the program lineups.