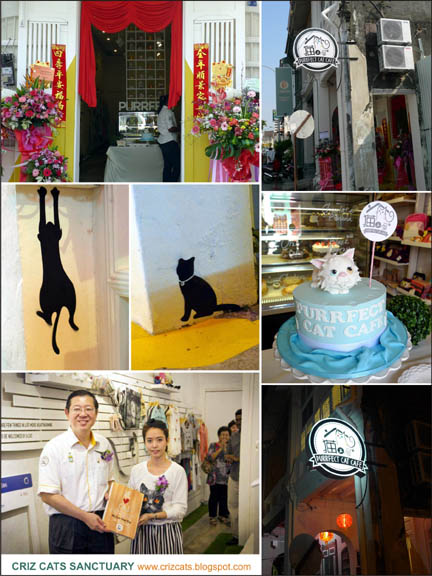 Purrfect Cat Café was finally officiated by our Penang Chief Minister, YAB Lim Guan Eng, on 26 January 2014. It’s the first of its kind in Penang, located along Lebuh Muntri, within the buffer zone of the UNESCO World Cultural City of George Town, Penang. Ever since the opening of the world’s first cat café in Taipei in 1998 (Café Dog & Cats/貓花園), the concept subsequently went viral in Japan and many other parts of the world. Being a pet lover ever since my childhood days and also as a cat blogger during the days when most of my little furry angels were still here running around on earth, the amazing news was something to be happy about. Here’s a video clip on the Grand Opening by our Chief Minister, YAB Lim Guan Eng.
Unlike the one in Kuala Lumpur which also provides pet supplies, pet hotel and also pet grooming, Purrfect Cat Café basically sells cat related merchandizes at the ground floor and the café would utilize the top floor. The merchandizes range from T-shirt for both genders, bags, stationeries, soft toys, mugs, cute cat figurines, earrings, key chains and more. I do hope that they would also sell some cat supplies as well in the near future. Here’s a peep at what you would be expecting upon entering the premises. Currently, Purrfect Café is charging a minimum spending of RM18/pax. The amount would be based on the accumulative pricing from the designated menu which would include food and beverages. You can check out more on the items available at CRIZ BON APPETITE.
Prior to visiting the cats, you have to sanitize your hands and take off your shoe before moving upstairs where the cats are. Moving up the white wooden stairways of the premises would lead you to an enclosed area where there would be two segregated zones. One zone would be cat-free where you could sit down and enjoy your food and beverages while watching the adorable cats in their play room. The other zone would be the cats’ personal play room and guest room where they would mingle with the guests while showing off their cuteness. Please take note that the cats’ play room is out of bound for unauthorized humans. There’s also the Terms & Conditions (as shown in photo below) while patronizing the cat café. Do take some time to digest the information stated within before moving into the cats’ play room. Failing to do so, you might get yourself slapped with a heavy fine of RM100. Another new term would be that children below 10 years old cannot go into the room by themselves, unaccompanied by adults. The cat café currently has 8 cats at the moment. I managed to play with them during a few visits as they are always on different shifts. Let me introduce them to you. Firstly, we have Snowy, Purrfect Cat Café’s iconic mascot, the first resident, a white Local Shorthair with duo colored eyes, a form of heterochromia commonly occurred on white furred cats. The bobtail white tabby had the personalities almost like the American Bobtail – energetic, affectionate, intelligent, vocal and territorial. Another main attraction would be Orange, a Persian, an intelligent, sweet-tempered cat, always all out to seek attention and affection. He loves to play intermittently after resting his heavy butt. Some loves to call him Mr. Proud as he’s not the cat that would pay attention to your calls. He can be rather bossy at times with his facial expressions. LOL! We then have Bear, a blue colored coat and double ear fold Scottish Fold. Practically, Scottish Folds are “owl-like in a cat suit”. He can be quiet at times but can show his sweetness and affection after knowing you better. The gentle and yet reserved Bear tends to be independent and love to have some free space and time away from all the commotions within the room. He loves to entertain himself rather than being sociable to strangers. A milder temperament cat would be Teddy, a single ear fold Scottish Fold. Teddy on the other hand loves endless attention and affection. He’s great in getting along with just anyone in the room by trying to impress them with his over cuteness and bubbly big eye balls. I also met up with Leo, a Bengal. Leo was a bit different compared to the younger Molly as stated below. He’s more mature I guessed. He seems to have a mild personality, from temper, adaptability, sociability to politeness. Though playful at times, he’s not as assertive and playful as Molly. He tends to go about the room doing whatever he likes by showing his curiosity over his surroundings. 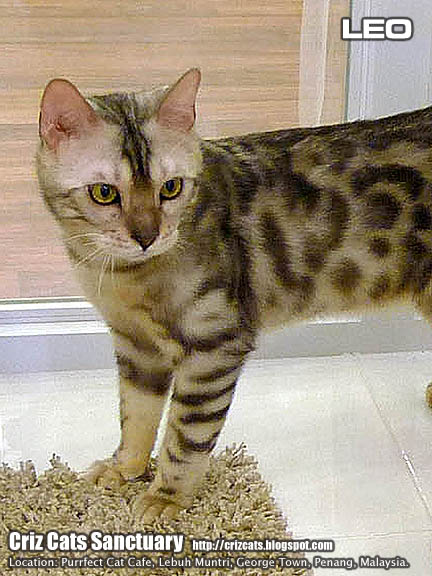 Now we have Molly, another Bengal. One word to describe her – HYPERACTIVE and she’s definitely not a lap cat. She tends to do lots of funny stunts on practically anything within the room. Well, this intelligent brat surely would need lots of space and toys to play with. At least this would her occupied from boredom. She practically loves playing with young children due to both of them having the same energy level to run around. 😛 “I’m not grumpy. It’s just the marking on my lips”, said Marble, an American Shorthair. Marble has nice personalities with mild temperament, not overly cuddly nor distant, neither couch potatoes nor hyperactive. She can be a great companion since she can adapt well with other animals and children. Don’t judge her by her look as she’s one adorable cat which has the tender loving care for anyone. There was also Nala, a tortoiseshell colored British Shorthair. She tends to be rather shy, low profile and reserved during the first approach. However, once she knows you well, she can be a faithful companion, endlessly showering not only you but the whole family lots of affections. She tends to be an independent cat and can adapt quite well when she’s left alone. Generally, there are many complaints by the locals on the exorbitant charges of minimum RM18 for a two-hour session, which would be based on the accumulative cost of the food and beverages you have ordered. Just to be fair before I pass on any verdict, let’s study the other cat cafes’ charges in Malaysia as well as from overseas. In Kuala Lumpur, the “Country Cat Café” is charging RM14.90 per person per hour inclusive of one drink. In Japan first cat café, “Cat Store @ Neko no Mise”, is charging RM5 (USD1.50) for every 10 minutes, meaning RM30 (USD9) an hour and they do have a special three-hour plan for RM72 (USD21.50). In Korea such as in the “Cat Attic” in Gangnam, no entrance fee or minimum hours limitations but you have to purchase at least one RM19 (USD6) worth of drink. Most patrons would spend around 1-2 hours of their time there. In Singapore, there’s also the entrance fee of SGD14 (about RM36) plus a drink but unlimited time frame. So, you see, Purrfect Cat Café is not overcharging exorbitant fees compared to the rest of the same themed cafés throughout the world. Much like renting a pet, people do need to pay a surcharge to spend time with the cats and rules may vary from cafe to café. After all, such cat cafes would need to find ways to survive with the high cost of maintenance, especially when most of their cats are pedigrees. A true animal lover would understand this well. On top of that, it’s also a way to keep away cheapskates and curious visitors, thus to avoid unwanted attention, distraction and stress towards the welfare of the cats.
However, it would be great if Purrfect Cat Café would have an hourly rate instead or maybe a minimum purchase of a drink. This would generate more turnovers and at the same time would cut down with the unnecessary overcrowded situations resulting in the lack of sitting spaces. Sadly, this also means that regulars such as yours truly would have to spend more by the hours. I do hope they have special memberships for regulars in the near future too. Overall, I love the café a lot but it won’t do much good to my pockets if I were to visit those cute cats in a long run.
Purrfect Cat Café is located just 2 shop houses away from the Camera Museum along Lebuh Muntri. Finding a parking space along the narrow heritage stretch of road can be rather painstaking. The most practical way to get to the café would be by parking your car opposite the Cititel car park (Jalan Penang/Lebuh Muntri corner), along Leith Street or along Lorong Love (next to the St. Xavier’s Institution) and go by foot towards the café. Please remember to buy your parking coupons or you would be slapped with a parking fine.