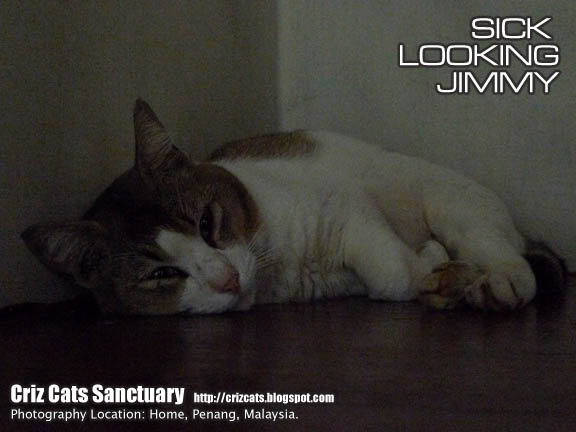 HIDING IN THE DARK

By: crizlai
In: Uncategorized
Tagged: cats, J Family Kitties, jaundice, Jimmy, liver, vet
With: 2 Comments
Jimmy has been hiding at all the dark corners of the house ever since he came back from the vet. At times, he would face the corner of the wall as if I forced him to wear a “dunce” hat just because he has been sick. I don’t like all his recent acquired behaviors. It got me in a more panicky state. His “angel” twin, Joey, behaved exactly the same way and she was gone 3 days later. I sure won’t let Jimmy be taken by the same fame as his sister. I have been closely monitoring his moves for the last 36 hours. Luckily, he was practically sleeping all the time doing nothing except getting stained with his acriflavine yellow colored urine. My worst dilemma now is to get him to consume something on his own. Since his liver problem issue, he has not been eating anything at all. Upon getting the vet’s green light, I managed to force feed him with some fresh milk last night. This morning, I managed to blend in some ocean fish in jelly with fresh milk and syringe fed him without much hassles. The problem came when I tried to feed him with his medications and vitamins. He spitted all out! I even tried grinding those pills into powder form and secretly mixed into his food and syringe fed him. He vomited all out! How could he recover if I could not get much medication into him? The vet advised me to try again later tonight. If I still could not handle his reluctance to have his medications, he would have to be admitted first thing in the morning and put on drips. That would be my last alternative since I have no way to get him back to health. I love Jimmy a lot but his wild ways when facing something he disliked into his mouth (even when wrapped in a warm towel as advised by some friends) is something I just could not handle well. I guessed I should not hold back some cost on this urgent medical need anymore.