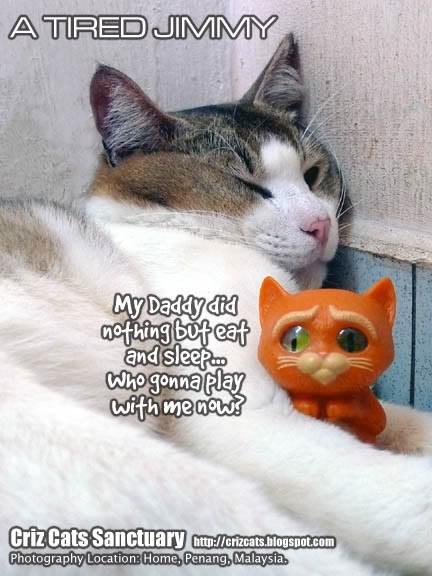 By: crizlai
In: Uncategorized
Tagged: cats, FLUTD, J Family Kitties, Jimmy, vet
With: 11 Comments
Jimmy was discharged! I’m glad he can be home to be with the rest of his siblings but it was not the same as before. Mama Jessica, Janice and Jayson thought they had seen a ghost cat! Everyone was avoiding getting too near to him after his 6 days of disappearance from the house. Jimmy a ghost? LOL! I guessed it could be due to the strong smell from the vet and the J family Kitties all had some bad experiences at the vet before. Unfortunately, I was advised not to bathe him for another week or so to avoid being brutally scratched as he could still be having some abdominal and stomach pain due to the plugged catheter earlier. Anyway, some antibiotics and pain killer pills were to be given to him for the next few days. Those medications might be the cause of him sleeping most of the time. 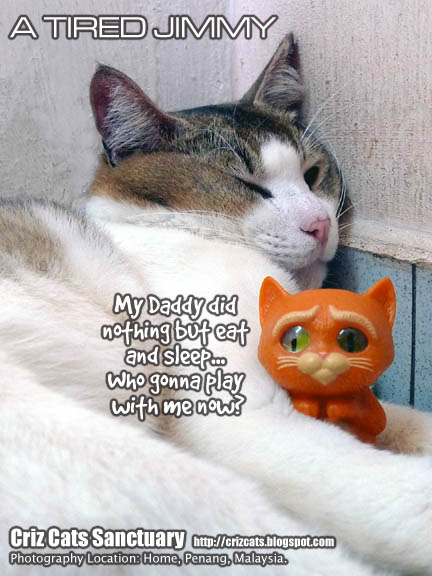 Jimmy is doing fine now. He has been recuperating quietly ever since he came back. The only problem I have now is on how to slow down his “tap”. LOL! Well, it was great to see him peeing at ease now but the frequencies were once too many times. I think he would need to take time to adjust to his normal peeing schedules. As for appetite, he has been gobbling down his food as if there would not be another tomorrow. Luckily, I did stock up lots of the wet food he took at the vet and also the Hill’s prescription diet pack. If not, he would not eat anything at all, not even his regular food. That would have given me a hard time mixing in his medication in the food. The other issue I have to settle now would be on the rest of the kitties. Was it the scent of the special food given to Jimmy having such a great influence that they refused to eat their own now or was it the stress of seeing a “ghostly” Jimmy? All of them are not consuming as much food as they should. Even the vet could not give me an answer to this issue. I’ll have to wait a few more days to monitor their appetite. 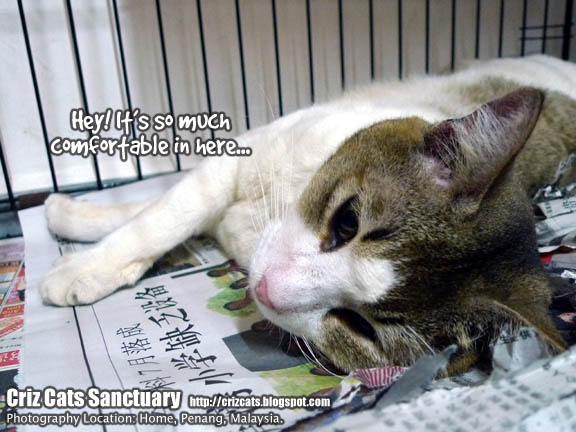 One very obvious habit that Jimmy had acquired during his stay at the vet’s was his sleeping habit. He won’t sleep next to my working table or fight over my sofa now. Surprisingly, he would rather sleep in a cage? Huh? What a weird behavior change compared to his previous fear for being caged. Anyway, I did not lock the door and would surely not stop him from roaming around the house freely.

It has been a long week of running around. I’m totally worn out. It’s time for a long rest to recuperate my own tired body. I truly need all the strength to support the pet community here. Thanks again for everything that you have done for the J Family Kitties.

Lastly, I would like to seek your help on something that would be beneficial for the pet community here. It would only take a minute or two of your time to help the Australian couple residing in Langkawi, Kedah, Malaysia to make their dreams come true. They are currently running the foundation with little to no outside assistance. They will only need your ONE VOTE to support them in winning the AUD$5,000 grant contest to set up LASSie (Langkawi Animal Shelter & Sanctuary Foundation). Deadline is less than 24 hours! That would be a whole load of money to help out those abandoned animal on the island. I’m not doing this for myself but for the animals that deserved the best in life. 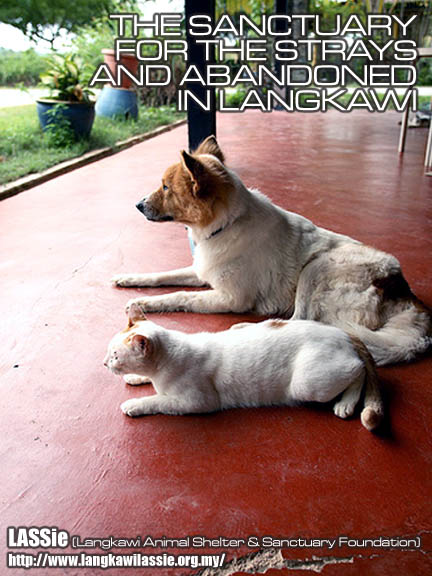 Please vote at http://sunsuperdreams.com.au/dream/view/help-care-for-abandoned-dogs-and-cats-in-langkawi and do check your email to confirm the vote or it won’t be counted as a vote. I appreciate your help on this matter. Thanks~ 🙂
2012-02-28
Previous Post: UNPLUGGED BUT STRANDED
Next Post: IS JIMMY FEELING BETTER NOW?