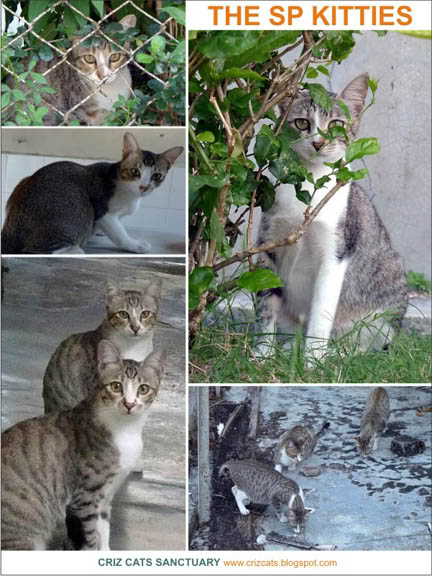 By: crizlai
In: Uncategorized
Tagged: adoption, cats, Katanutta, life, Lobha Dosa, rant, Rasanutta, relocation, Santi, Santutthi, Sayalay Paramacari, SP Kitties, Upekkha
With: 1 Comment
Before I proceed with my post, here’s a little update on Mama Jessica. The bleeding has stopped finally and she’s doing very well with her daily medication. Let’s hope it stays that way. Thanks for all the supports and wishes sent earlier. I appreciate it a lot.

Some of you may not be aware that in late Januaruy 2011, I had heavily publicized a family of 6 cats up for adoption in FaceBook. Those cats were actually the adopted children of a Buddhist nun by the name of Sayalay Paramacari. I called them the SP Kitties. As she would start to be on the move again very soon, all her cats needed to be relocated immediately. Moreover, her old house would also be demolished within the next few months for a new development. One thing which did amazed me was that all her cats were all born on different auspicious days, ie, X’mas Day, Wesak Day and a few days’ ago 4 new kittens on Chinese New Year. She even had them named after their unique characteristics. Getting a cat being adopted in Malaysia has been really tough, especially when one is not of any pedigree breed. It was until today that we thought we could manage to send all the kitties to their respective homes when an unexpected incident occurred. Two of the kitties were released back at the old residence by an adopter when his friend was not available to pick up the kitties. That was an act that caught us dumbfounded as it was not so easy to put the outdoor cats back into the cage. Now those two were missing. Let’s hope they could be found soon as they may not find any food and lodging when the house is being demolished. Both the boys, Rasanutta (in Pali meaning sentimental) and Lobha Dosa (in Pali meaning Greed & Aversion) were born on Wesak Day (the birth, enlightenment and death of Lord Buddha) – 28 May 2010. It was a big mistake they were released back into the wilderness. If only they were sent to my house instead. At least I could temporary shelter them while waiting for new adopters. You might say it was a blessing in disguise as I managed to save another boy from being turned into a stray. Upekkha (in Pali meaning Equanimity) was born on Christmas Day 2009. When I thought the loss of my Jeremy Boy near Christmas 2010 has brought me much heartache, I was gifted with a Christmas boy. Let’s hope the J Kitties are receptive on his presence or I might have to put him up for adoption too. Don’t you think he’s real handsome and somehow resembled a bob-tail version of a larger Jimmy? Upekkha’s twin sister, Katanutta (in Pali meaning Gratitude), the sole female in the SP Family, has been lucky. She’s being adopted together with her few days’ old, Chinese New Year 2011 born quadruplets. I hope her new owner, Sergeant Abdullah, would be more responsible towards their well-beings. He was the one who released those two kitties, Rasanutta and Lobha Dosa due to some miscommunications. Aww… I missed these babies now. They reminded me of the J Kitties when they were in that tiny weeny sizes. Aren’t they adorable? Santhi (in Pali meaning Peace) and Santutthi (in Pali meaning Contentment), males, both born on Wesak Day (28 May 2010), were also lucky as they have been adopted by another cool family. Unfortunately, Santutthi was involved in an accident a few days’ back that resulted in him limping all the time. He would be required to be put on a strict medical observation. Let’s pray that he would get well soon or else he would need to be sent back to the vet for further treatment. Hmmm… Upekkha seemed to enjoy himself in the new place, although I had to cage him up for the next few days for fear he would run away with all the firecrackers bombing out there during this Chinese New Year period. The best news is that he loved me so much that he would let me pat him to sleep. Gosh! I’m beginning to pamper him with all the rich food.. Haha! Well, he’s not complaining and has been busily munching and drinking away~ Err… Why did I start calling him Jerry now? 😛