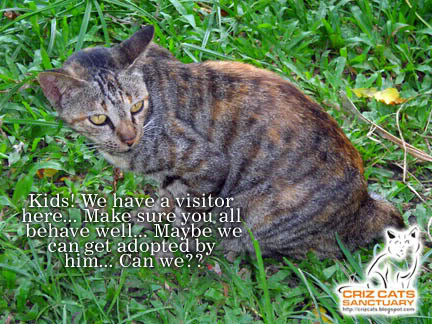 ALL IN A FAMILY

By: crizlai
In: Uncategorized
Tagged: adoption, cats, kittens, life, photography, rant, stray
With: 6 Comments
Speaking of sanctuary, I was in one for the second time today upon recommendation by a friend to seek treatment for my acute back pain. This is truly a peaceful place to be, not only for animals but humans as well. The whole place was full of wild plants, insects and birds of all shape and sizes. Of course, there would be the woofies and kitties too. I met up with an elder woman. She was as compassionate as I am. Living alone in a little house within the compound of the sanctuary, she has also helped feed those hungry strays around her.

She was telling me how hard it was to get someone to adopt those stray cats that have been lurking around her house. I agreed. In fact, both of us had the same thinking of not letting those poor souls ended up in an animal shelter for fear that they might be “ahem ahem” when things got worst. She showed me around in her fragile pairs of legs as she felled down barely few days ago. Both of us were there to seek treatment for the chiropractor there. To my surprise, those kittens were extremely cute. I almost took them home but I already have NINE at home. I was sure those brats would have created some havocs at home while I was there. They did… as usual. LOL! Anyway, just to share with you some photos of the family. By the way, I have the habit of carry a small pack of cat food with me always. 😛 Well, don’t you feel like taking them home now? Somehow, something in them caught my attention immediately. It’s not their curiosity. It’s not their cuteness but their little gesture of wanting more love from us. Isn’t that what every single kitty would want from us forever?
2008-09-25
Previous Post: JANICE GREW HORNS
Next Post: A BIRTHDAY WISH TO OPUS