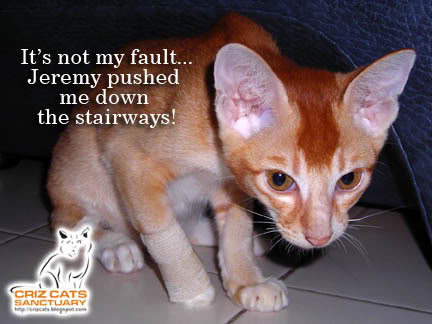 I THOUGHT THE WORST WAS OVER

Note: Some serious solutions are needed urgently at the end of the post Living in a house with 2 adults and 4 kittens could be as fun and happy but sometimes it may end up worst than hell. Many of you are aware that Janice was down with a high fever few days back. Well, she has recovered miraculously fast with my tender loving care. In fact, I am even closer to her now than her brothers. Maybe she knew that she deserved to be pampered more now than when she was sick. I thought the worst had gone away but I was wrong again. It will take you an hour to watch Emergency Room (ER) on the tube but it took me 3 hours to handle emergencies within the J family. Do not worry, Janice is still fine. It was the rest that got me worried unnecessarily. Even though I am not a qualified doctor to nurse anybody, I still need to learn up some knowledge on handling emergencies just like during the birth of the triplets. Let me share with you what had happened during the 3 hours in the photos below. HOUR 1:
I heard something fell down from the stairways and went to investigate. It was Justin lying on the floor looking blankly into my eyes. Up there was Jeremy peeping down at me. I caressed Justin and brought him into the sitting room. There was a soft moan. Immediately I knew something was not right. He was limping with a soft cry. I quickly checked on his right paws and found that it hurt him. I wrapped it up and let him lay by my side. In his eyes, I can see him blaming Jeremy for the accident. As usual, Jeremy would always act innocently as if nothing had happened and continued with his ever hyperactive trend of disturbing everyone. I kept my patience and left Justin by my side to recover while I continued with my work. HOUR 2:
Bing Bang Boom… Thud! Again I heard something fell down from the stairs. I saw Justin stood up beside me wondering too what that might be. I went to investigate thinking that it might the strong wind that blew a box down. To my surprise, it was Jeremy lying there as if he was dead. I quickly carried him up and brought him to the sitting room. He opened his eyes and was panting heavily. I thought of calling the vet but he suddenly stood up and jumping on only three legs. Gosh! He hurt his left paw! I wrapped that up too and left him next to Justin. Immediately, both of them snuggled and fighting all over again, even both are handicapped. HOUR 3:
I just could not concentrate on my work due to their noises and decided to interrogate what really happened. I checked with Janice but there was no response. I heard her snore too… haha. I guessed she was still recuperating from her fever. I checked with Jayson and found him on the headrest watching TV. Surprisingly, he just would stop at anything when the TV was on. What a TV addict he would be… LOL! Maybe he was attracted to the movements on the screen. 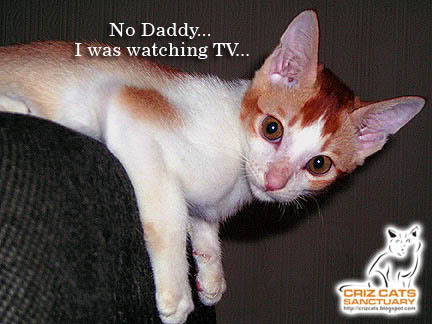 There was no point in checking with Jonathan as he will always be outdoor sunning himself away. So I checked with Jessica. She looked rather tired due to feeding the ever hungry babies continuously. She looked at me and gave me a soft purr as if she was telling me that she did not see what happened. She suddenly turned and vomited some reddish and slimy substance onto the chair. I quickly carried her to the sink to wash her up and gave her some warm water. I then laid her on her bed away from the disturbance of the brats. She is still sleeping now. I have just checked on her and she seemed tired. Let’s hope she will be fine later as the vet will only be open on Monday. Some of my friends were asking me on why my hair had gone so whitish in a short period of time. Here is my answer… Haha! Jeremy! Gosh! Not again! Can someone please advice me what else I can do to stop this indiscipline kitty of mine not to pee and poo on my floor? It has always been at the same place, no matter how well I got rid of the leftover scent with anti bacteria floor solution and some anti pee-poo spray. Spanking would not help at all. Neither will scolding and directing him to the specific place to do his business too. I am totally lost! He has just peed and it would not be long before he messed up the place with his paw prints after he had pooed. I can’t even type in peace. Grrrr… He just did that! It may sound gross but I have another problem now. The stool is all watery, slimy and reddish in color! Don’t tell me that is blood! Help! Where is my vet when I needed him most! I better check on the rest too now. Janice – still sleeping. Jayson – fine. Justin – no way to check (I’ll tell you why next time). Jeremy – as above. Jessica – as above. Jonathan – fine. Hmmm… Their water is from a boiled source. Their food has always been dried food except I tried out the wet version for the first time just last afternoon. Could it be due to this? I have no idea and if anyone had this problem before please help me out before I take all of them to the vet for a thorough checkup first thing tomorrow morning.