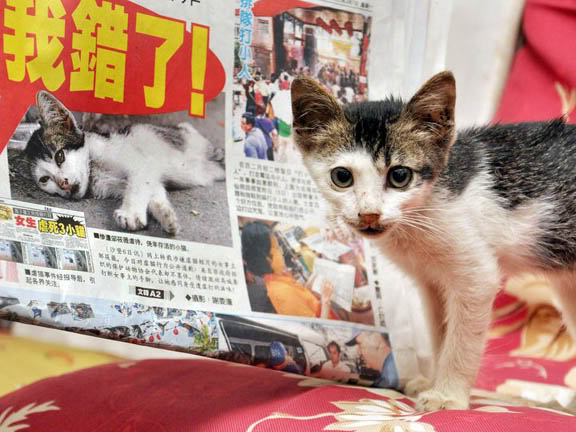 COULD THIS BE ONE OF THE ABUSED SERDANG KITTENS?

By: crizlai
In: Uncategorized
Tagged: abuser, cat killer, cats, kittens, news, selangor, Serdang, Seri Kembangan
With: 4 Comments
Tati Ambia shared this news regarding the present life of one of the remaining kittens in the Serdang Cat Killer case. According to the news, Victor Fei from the Selangor Times, went to the crime scene located behind KFC at a fruit shop, next to the Seri Kembangan market and saved the dying kitten without any hesitation. The kitten is now back to normal health. Thanks Victor for your compassionate heart to give this kitten a new life.

There was a bit of doubt here too as no one could ascertain if this was one of Chow Xiao Wei’s victims. From the date Chow admitted abusing the kittens on 19 February 2011 until the day she held a press conference on on 6 March 2011, it was 15 days apart. Could the kitten suffer such an ordeal for such a long period? My answer would be a “Yes”.

I had personally encountered such a case before when I tried to help a black tabby with serious head injury from what I presumed was a badly abused case. Her head was struck with a hard object, most probably with a stick, until you can see her open skull with blood stains. I tried getting her to a vet but she disappeared in fear. Things did not look promising then as I could not trace her at that location ever since. Two months later, I mysteriously spotted her at the same location scavenging for food. At least her head injury was better. The wound had closed up with pinkish colored flesh remained. Again, I failed to capture her for treatment. A month later when I went back to that place, she was there again. This time, her black fur had grown back steadily but slowly. If you are at KFC, Jalan Larut, Penang, you might still bum onto her once in awhile. Unless you have her confidence, it’s not that easy to approach her still. From this case, you would know there are possibilities that a cat would live on, even as hardcore case as this one.

You might ask me how confident I am in identifying a cat. I had single handed helped my mother cat, Mama Jessica, in two deliveries. In fact, they had gone through 4 years with me, from a kitten to beautiful ladies and handsome gentlemen. Identifying a kitten would not be hard at all as each kitten has their own markings, just like the fingerprints of a human. If you study closely on the kitten photo in the newspaper, you would notice that there’s a “M” marking on the forehead. It’s the same as the kitten on the right. Even the little “mold” below the lips is the same. If you compare the lying position of the kitten in the newspaper with that of the kitten, there are similarities too. The fur color of kittens might fade a bit or changed to more orange as they grow up but those markings would remain the same. Let’s hope that this lucky kitten would have a better life from now on. Let’s pray that those who had gone over to the rainbow bridge would find some peace from the nightmare. 2011-03-10
Previous Post: SERDANG CAT KILLER SLAPPED WITH SECOND POLICE REPORT
Next Post: FEAR AND ANGER WOULD NOT MEND YOUR RELATIONSHIP WITH YOUR CAT