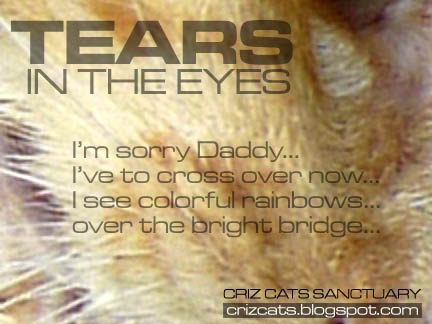 THE DAY HE LEFT WITH TEARS

By: crizlai
In: Uncategorized
Tagged: awareness, cats, Jeremy, life, obituary, rant, sadness
With: 6 Comments
I would like to take this opportunity to thank everyone for the wishes and comfort during these sad moments. Jeremy was the love of my life… my son… the “man” behind my blog. Without him around, my life had gone crashing down. It happened so quickly and I was totally helpless to help him pull through. Subconsciously, I still filled up his bowl daily… That showed how much I had missed him and not wanting to think that he had left me for good. I’ve no reasons why I’m still so reluctant to put away his food bowl, although the rest of the J Family Kitties enjoyed the extras. Maybe that would be the best way to overlook on that part for some time.

Trudy (‘Kaika, Tanith, Midnight, Stella, Blackie and Miss Kitty’s mum) was kind enough to warn me through ML on the possibility of some warfarin (rat poison) presence here, just in case the rest of the kitties had gone wandering around biting on any poisoned rats. Thank you for your concern, Trudy. I appreciate it a lot. From my knowledge, no one I knew was using such toxic substance here. Moreover, Jeremy would rather go dating at Monty’s house than to waste his energy chasing rodents and the rest of the kitties are rather homely. If only Jeremy knew Monty was spayed. Monty indeed loved his presence over the rest of the kitties.

I was really in stormy anger when I went over to my vets for a post mortem of the incident. They were supposed to detect any health problems on my babies but they failed to do so for Jeremy. The act of moving to a new place about a month ago and just 15 minutes’ drive to the vet did not save Jeremy’s life. Only cat fight wounds from a recent brawl with the mafia cat here were treated instead of checking further the cause of him losing some hair at his back. It was only concluded that it could be due to CRF (Chronic Renal Failure) he has been suffering from for awhile, in which none of us were aware of and with no symptoms at all. The illness suddenly took a bad turn into ARF (Acute Renal Failure) during the last two days of his life, as pointed out by Trudy.

I guessed I have to stay strong now and share my bad experiences here so that the rest of you out there would be knowledgeable enough to spot the hidden symptoms to avoid the same life threatening scenarios as in Jeremy’s case. On the other hand, I’ll need to shift my mind not to wander off wildly again as I have been during the past few days. Here are some comparisons as I found from vetinfo.com which I would be using to show on Jeremy’s recent behaviors:

Common symptoms of CFC include:

* Excessive urination and thirst – Normal healthy stools but peed quite often in small puddles.
* Loss of appetite – No signs of this. He was hungry always.
* Fatigue – He had his usual sleeping time. Nothing suspicious found here.
* Weight loss – A bit and I thought it was due to the relocation stress.
* Vomiting – Not that I have known of except for some fur balls throw up.
* Bad breath – None as he’s the cleanest cat in the household.
* Drooling – Not as regular as before I had moved here but extremely during his last 2 days.
* Dehydration – He did drink a lot though from running to and fro Monty’s house.
* A Dull Coat – The normal change of hair seasonally but it could meant he was not well too.

Key signs of ARF include:

* Lack of Coordination – He was still moving around here and there with no such signs.
* Refusal to eat – He ate a lot in the morning but not at night in that fearful state.
* Pain and straining during urination – Not that I was aware of.
* Vomiting – None at all.
* Weakness – A bit which I assumed was from a mild cold from the recent wet weather.
* Disorientation – The night before his missing as he was in “Sphynx” position and not lying down, shaky and in fear, which I assumed was the threat from the mafia cat. It’s a crashing sign for immediate medical attention!
* Bad breath – Not at all.
* Seizures – None at all except during the posture he was in when I found his body 🙁

Other findings from my personal observation on Jeremy:

* Fur Loss – Only after moving here which I assumed they were from some cat fights.
* Pee Color – Deep yellow and extremely smelly than norm.
* Hide & Seek – During the last few days, Jeremy has been digging and hiding in dark areas in my house. I thought it was the nature of cats to do so… mischievously.
* Constant Seeking Out – I thought he wanted to snuggle with me more without realizing that he was not so well and would like to be as close to me as possible. I should have known that he wanted to tell me that he was sick and wanted my immediate attention and action.
* Unusual Purrs – It could be an indication that he was in discomfort instead of content. If only I could understand cat language to hear him out. 🙁
* Blood Stain Mucus-like Substance – It could be due to some internal bleeding which my vets and I could not determine the cause of it. If only he stayed and did not run away, he could have been saved. 🙁
* Unusual Cries – Do not ever ignore such cries from other cats. It could mean that they are seeking help for someone they love. If only Monty could show me where Jeremy has been hiding, I could have had rushed him for emergency treatments.

I’m still in a sad and broken down stage now but I have to brave myself to write this post. It’s not so easy as to write on something you have lost recently without drowning in sorrow. Jeremy would be grateful for what I had written here to share with others. At least, another life would be saved for speedy actions. The picture of his cold body still haunted me nightly. The thought of his last moments on his face and the tears in his sparkling eyes left a deep wound in my heart. For 3 full years, I have been treating Jeremy as if he was my own son but he just left me without allowing me to be by his side during the last moment. Who would have expected that his birthday would become his death day?

The J Family Kitties have been real supportive these few nights by cuddling around me at all times. They somehow could sense my sadness. I hope I can pull through this sudden trauma very soon… it has been the saddest moment in my life…

I WISHED I COULD WIPE THOSE TEARS OFF OUR EYES…